7 Awesome Reasons to Take Notes on Your Tablet in Class ... 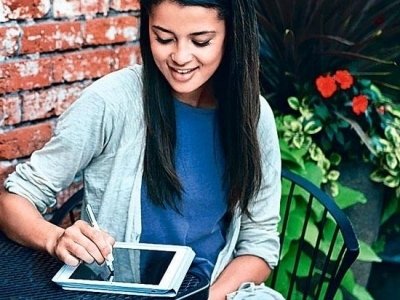 1 The Notes Are More Legible

One of the most obvious reasons to take notes on your tablet is that if you have messy handwriting, you will be able to clearly read these notes. Typing your notes on a tablet makes studying them much easier in terms of legibility. So instead of struggling to read the scribbled notes you attempted to write down from your fast-talking teacher, try typing them on the notepad of your tablet! You will be amazed at how much easier your life is come midterm time.

2 Typing is Typically Faster than Writing

Due to a heavy reliance on computers in our society, typing is typically faster than writing by hand for most people. This comes in handy for those classes in which your teacher doesn't understand the concept of speaking at a normal pace. While this won't be the case for everyone, I personally had a grade-improvement when I switched from hand-written notes to typed notes, because I was able to record more of what my teachers were discussing in class!

3 You Can Record Lectures

Afraid you might miss something during lecture, while you're trying to take notes? No worries. Most tablets come with a "record" feature, allowing you to take audio recordings of the lectures, so you can go back and listen again, to catch anything you might have missed.

I used this a lot when I was taking Calculus - when the instructor was done writing out complicated problems, I'd snap a photo with my tablet, so I could review it later, exactly as he'd written it. It's so convenient and helpful, especially when you're studying for an exam, to see the original example, right from the white board!

In addition to being able to check your Facebook while taking notes on your tablet, you can check your email as well. I like to use class time to respond to my emails, and it is so easy to get away with because it looks like you're taking notes. I just make sure to look up every once in a while and nod at the teacher while I am typing to make it more convincing.

6 Don't Have to Carry around Multiple Notebooks

I used to carry around a separate notebook for each class, but now I just carry around my tablet and have a separate notepad tab for each class. This is so convenient, because all of my notes are in one place. It is also reassuring to know that you can have multiple copies of these notes by emailing them to yourself, so that if you lose your note-taking device, your notes are not gone as well.

7 Lighter than a Laptop

I know a lot of people take notes on their laptops in class, but unless you have a really light laptop, carrying it around can add quite a bit of weight to your backpack. Tablets are very light, so they are easy to carry around campus, either in your backpack or bag!

These are some of the main reasons I take notes on my tablet in class. Do you prefer to use your tablet to take notes, or do you prefer taking handwritten notes?