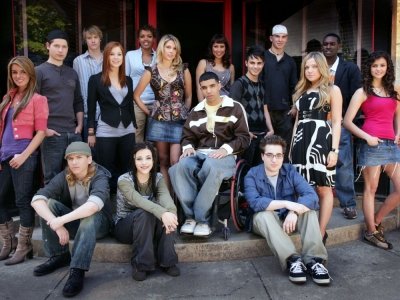 Not really sure why you should watch Degrassi? Let me elaborate on just why you should give this long-lived television show a chance. While I don’t regard Degrassi as one of the greatest shows on television, there is something about it that always draws me in. Frankly, I believe its story lines are overdramatized and the acting could use some improvement. So you would think that there are no reasons why you should watch Degrassi, right? Yet strangely, there are because for some peculiar reason, I haven’t missed a single season.

Today every television series or movie that is set in high school falsely portrays everything about it. However, Degrassi comes closest to showing its viewers what high school life is all about, which is one of the reasons why you should watch Degrassi. The characters put on minimal makeup and wear the types of clothes that regular students would actually try on. Plus the cast itself is the same age as they are on screen.

2. Some Storylines Are Interesting

While the writers of the script sometimes go a little overboard with the storylines, some of them are actually very moving and captivating. Degrassi covers many topics, such as bullying, suicide, rape and drugs, and doesn’t leave anything out. For some this is off-putting and for others it’s relatable.

3. It Has Deep Character Developments

Degrassi follows the lives of a group of intertwined teenagers who live in the same area and go to the same school. While many characters come and go, most of the time the main cast stays the same. As viewers we are able to learn more about our favorite characters over an extended period of time.

As an old fan of Degrassi, I have to admit that the early seasons of Degrassi were some of the best. The storylines were of a better quality and the show overall was at its prime stage. Therefore, seeing older characters pop in here and there is very exciting. This is the closest we will ever come to the old Degrassi, but we’ll take it!

Degrassi first started in 2001 and over the years, they have produced 13 seasons of content! So this means that if you are just getting on the Degrassi bandwagon, you can just binge on the whole show. No breaks, no commercials, no waiting for the next season! Who wouldn’t want that?

Let’s take a look back and see just how many huge Hollywood stars had their start on Degrassi. Celebrities such as Nina Dobrev, Drake, Landon Liboiron and Shenae Grimes all had roles on the Canadian teen drama. So look out, because I wouldn’t be surprised if one of the cast members became the next big thing in Hollywood.

7. You Can Expect It to Be on Air for a While

With the show on air for 13 years now, it really seems like it will never get cancelled. So you don’t have to worry about growing too attached to the show. Plus, with new cast members coming in every time the seniors graduate, this show can go on forever!

As mentioned before, Degrassi is not an award-winning show, but it has a very addicting quality. Plus it’s nice to have a show directed specifically toward your age group. So will you be tuning in for Degrassi?